The Flower of Life and Coldplay

Recently, while surfing on Facebook, I almost could not believe my eyes when I saw the new Coldplay album cover. It was so colorful and exceptionally beautiful, I couldn’t help but look at it. And the best thing is that in the middle of the image there was the flower of life, painted in colorful circles :-).

Absolute madness, these guys aren’t just some random people, and they spread this symbol over the entire planet and bring it to the masses. I have no idea what there is behind this story, but whatever, it is very positive for us all. So thumbs up!

I will definitely continue researching on the matter, because I genuinely want to know if the guys of Coldplay know more about the flower of life or if a designer had the idea of putting it on the cover.

The entire album cover is a mandala, it reflects all motifs, and shows a fantastic world. While looking at it, I have noticed many little things such as the boy on a cloud, for example, who seems to meditate, or the gate with the parrots, that looks like an entrance to another dimension. I was fascinated and still am.

Thanks to the maker.

As a small homage to Coldplay here comes a little advertising. Click on the picture to go to Amazon, where you can buy the album.

Update on the 07.04.2016: I did some research and found an article where the “Band Bring me the Horizon”    accuses    “Coldplay” of having stolen their cover.

Here you can have a look at the two covers next to each other:

I think they look quite different :-).

It’s not that easy with the flower of life, there are many different beautiful patterns.

Here is the link to the original article: http://www.independent.co.uk/arts-entertainment/music/news/bring-me-the-horizon-accuse-coldplay-of-copying-their-album-artwork-saying-they-should-have-googled-a6731671.html

Unfortunately I still haven’t found out why the two bands have decided to use the flower of life in their covers. I’d really appreciate any suggestions :-). 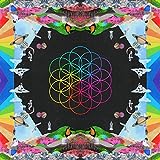